On Saturday, we were invited to a Shan festival at Wat Ku Tao.  We went with all of the people we work with at Thai Freedom House, and it was a blast!  And completely different from anything I’ve experienced anywhere else.

We were celebrating the young Shan boys in the community who were, in short, being inducted into Buddhism.  All boys, at some point before they turn 15, have to spend at least three days living at the temple, and for that period of time they are novice monks.  They learn about Buddhism, and also earn merit and good karma for themselves and their families.  Oh, and I forgot to mention – they aren’t allowed to touch the ground.

For the entire weekend, the kids are carried around on volunteer’s shoulders from place to place, and can only sit in designated spots that are elevated from the floor (I think they may be able to sit inside the temple, but I’m not positive).  They are dressed up like little princes in full costume: elaborate outfits, make-up, the works.  The Shan teacher at TFH had volunteered as one of the carriers, so we visited his Little Prince to receive a blessing.  And then we got to carry him! 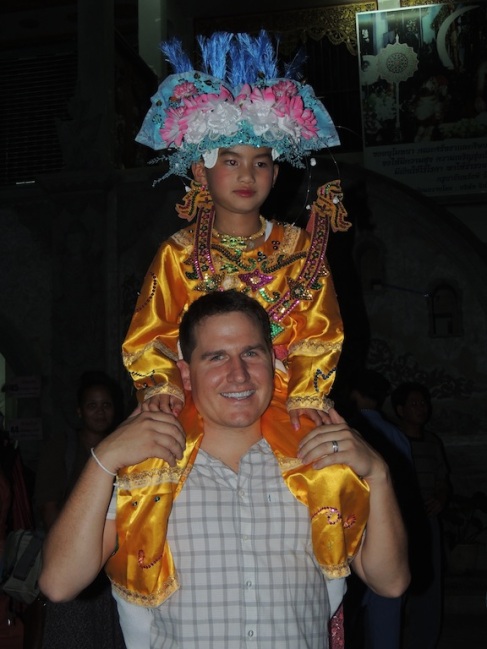 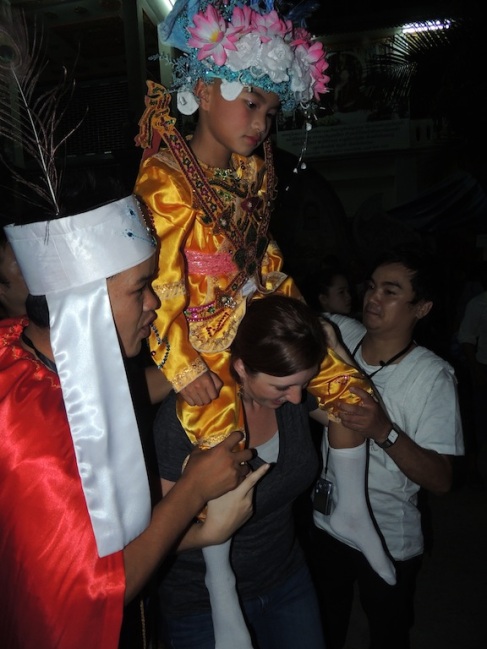 We passed him from person to person without letting him touch the ground, and while it’s likely that he felt kind of like a circus monkey while we all took pictures, it was very cool to be so involved in the ritual.  Normally, women aren’t allowed to touch monks (and you’re not supposed to sit next to them or even look at them, really), so I was surprised and excited to be allowed to do it too.

The temple at Wat Ku Tao is beautiful, with an enormous golden Buddha at the front.  The grounds around it had pretty much turned into a carnival, with booths all over the place selling everything from food, to pirated DVDs, to traditional Shan clothing.  We stopped for dinner at a booth that had tofu-oon, which may look weird but tastes amazing!  It’s noodles covered with a sauce made from yellow beans (it can also be made from soy beans, hence the name) and garnished with fried garlic, green onions, cilantro and chili sauce. 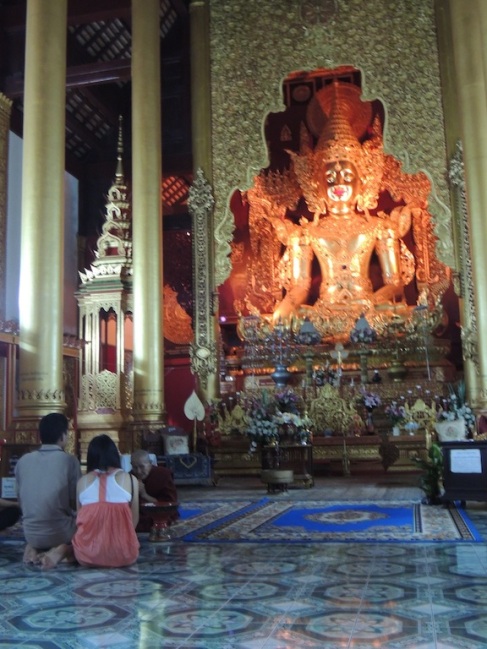 I’m looking forward to going back to the temple during the day to get a feel for what it’s like when it isn’t the home to a giant party!