For the last four days, Kyle and I have been enjoying some time back together with our Peace Corps family at our language and culture IST (in-service training). When we arrived back in September, this seemed like an eternity away – we hadn’t even started learning the language yet, so it was hard to imagine a time when we would need a refresher. And now it’s already come and gone!

Language IST is part work trip, part vacation. It’s held at a nice hotel at Lake Dojran, which is in the southeastern corner of the country (the lake shares a border with Greece and is really close to Bulgaria) and is known around Macedonia for the supposed health benefits of its algae. It’s a popular vacation destination for Macedonians, and by the time we left on Friday the area was pretty packed. We took language classes during the day, but it was much more laid back than when we had four straight hours of class every day in the fall. These were one hour mini classes that filled in some of the gaps in our language training and were a mix of grammar topics and more fun options like slang and colloquial expressions (my favorite Macedonian expression is “гледа како теле на шарена врата”, or to look like a calf at a colorful door. It means to look confused or dumbfounded, but it’s a really great image!) At the end of the week we had to do language presentations in small groups; our group played Family Feud with some of our new vocab words, but there were some really hilarious skits including a Lion King remake, the dating game, and one about a Macedonian and Albanian who fall in love and learn each other’s languages, only to discover in the end that they both speak English.

We finished with classes around 5 every day, and spent the rest of the afternoon swimming in the pool and the lake. I LOVE the water and it was so relaxing to have this time, especially since we got to spend it with friends who are normally spread all over the country. We stayed around after IST was over to enjoy a few more hours in the lake before heading home. The next time we’ll officially be together as a group will be next February for our mid-service training (although we’ll see each other at field day in the fall), and then before we know it we’ll be staring down the end of our service. CRAZY! 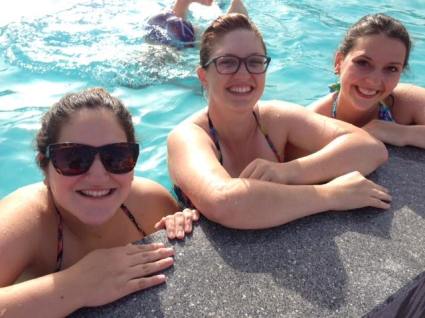 Chilling in the pool with Maria and Sarah

Kyle got a football brought back from the States 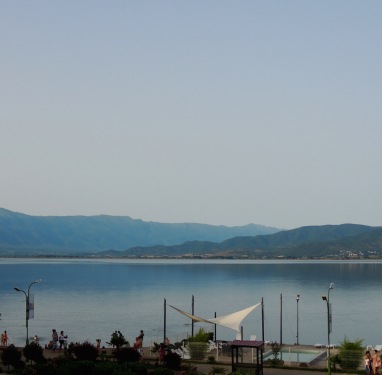 Part of the pool area at the hotel, which is right on the lake shore 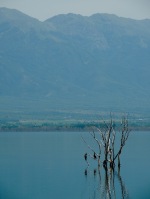 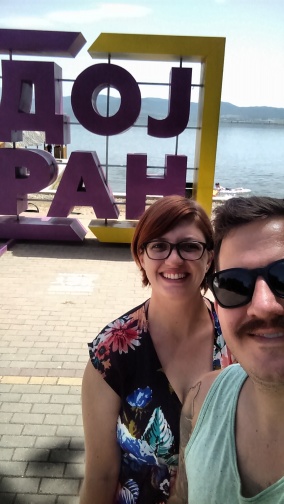 Strolling down by the shore