After a little over two months of waiting around… we finally started work!  We’ll be teaching at The Prince Royal’s College, a K-12 private school, in the Focused English Program.  I’ll have my hands full with fourth graders, and Kyle’s got 8th and 9th.

It’s been a little overwhelming to go from really not having a whole lot of people to see on a regular basis, to having lots of new friends to meet and go out with.  Especially since April was so hot and it felt like we were being hermits sometimes, for the last week my brain has been screaming TOO MUCH SOCIALIZATION AHHHHHH in fits of exhaustion from remembering people’s names and where they’re from and where they live and all the basics of introductions.  In a good way, of course.

The school itself is nice, but incredibly unorganized.  The Thai style of working and teaching is dramatically different to what we’re accustomed to, and sometimes it takes all I have to keep smiling instead of seizing someone and shaking them until they tell me the easy steps I have to take to get my work permit, or open a bank account, or figure out which office I’m supposed to have my desk in.  Not to mention the mandatory staff church service we had to go to on Tuesday.

I have never actually been to a full church service.  I mean, I think my grandma took me when I was still to small too have any objection (like, as an infant to show off), but not since.  I’ve been to mosques, sat through dozens of bar/bat mitzvahs, toured cathedrals – I respect those that use their faith to further the good of humanity, but I’m in no way observant of or adherent to anything.  So being forced to sit through a poorly translated sermon that had something to do with a guy named Amos, and said something about left and right hands (which I think was supposed to relate to being flexible as a teacher?), and included a vague statement about how teachers are sailboats, and how it was God’s will that we had come to work at PRC – it was a little much.  Considering that something like 92% of the staff and students are Buddhist, it was painfully awkward.  I will suck it up for the sake of employment, but I’m glad we only have to sit through services a couple of times this year.

Thankfully, I was able to get out my frustration at PRC by starting teaching at thai freedom house again. Last term, we had 15 students in our class (about 10 of whom would show up on any given day).  This term, thanks to word of mouth and our students recruiting their friends and coworkers, we have 23!  Even though we’re starting over from scratch with phonics, numbers, and basic conversation, it’s so much fun and so rewarding.  I come home drenched in sweat, hoarse, and incredibly happy.  The students are so excited to be there and learn that it’s hard not to pick up on the energy.  I can’t wait to see the progress they make! 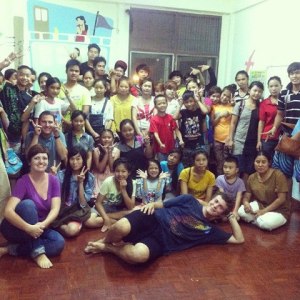