This weekend I got to help out at the Macedonia Model United Nations. Even though it was a long day, it was really incredible to see the participants become completely immersed in their roles, giving speeches, negotiating with one another, and drafting resolutions on an assortment of topics. What made it even more impressive was that for the vast majority, they were doing all of this is in a foreign language. The entire conference is held in English. 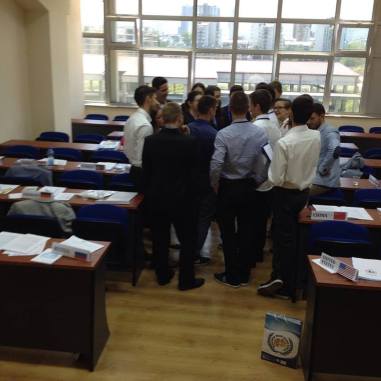 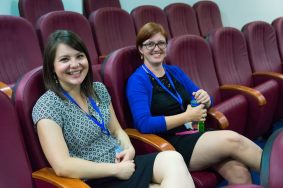 Gwen and I waiting for MUN to start 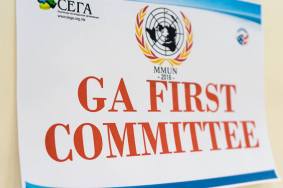 It’s really easy to take being a native English speaker for granted. No matter where you are in the world, it’s generally easy to find someone else who speaks it. I was at a meeting a few months ago where the facilitator underlined the importance of speaking English well as a member of the NGO sector simply as a matter of survival – grants need to be submitted in English, major conferences are mostly held in English, the research you need for a project is frequently published in English – and its dominance is only growing. Even people who speak another common language, like French or Arabic or Spanish, frequently learn English as a second language from a young age to aid their access to everything from university studies to pop culture.

Macedonian is only spoken right here in tiny Macedonia; even within the country there are dialects that make it unique to a town or region. It’s similar to other Slavic languages like Serbian and Croatian, but variations in vocabulary, grammar and accent make it distinctly recognizable as its own language. My Macedonian has been continuing to improve over the nine months we have been in country, but to be perfectly honest I could get by without speaking it if I needed to most of the time. From the time they’re in Elementary school students have English lessons, but this isn’t where most gain their skills. They are exposed to English in cartoons and movies and songs, and the boys Kyle works with in the scouts told him they practice their English in chat rooms when they play video games online. If I meet someone my age or younger, there’s a good chance they speak at least some English.

Slowly but surely, Macedonian is being increasingly encroached on by English words. Many words for my work in the NGO sector are simply cognates, and the same goes for most words having to do with technology – seminar becomes семинар, laptop is лаптоп. If I don’t know a word, my first step is to usually pronounce the English word with a Macedonian accent, and a lot of the time it works.

Something I often think about is what it would be like to be from a small country with a unique language and not having the resources to learn anything else. Or, what if you’re simply not good with languages and struggle to learn something so complicated and inherently foreign? It’s a privilege to have access to a world of information already prepared for me in the language I grew up speaking. I’m one Google search away from anything I’d ever need to know, no translation necessary. I go to the movies in foreign countries and listen in comfort while those around me have to make do with subtitles (and let’s not even get into the privilege of literacy in the first place).

My life has been enriched by learning new languages. While it would be easy to say that the dominance of the English language, combined with translation technology, will eventually make learning to speak anything else obsolete, so much culture and history exists within languages that their loss becomes more than simply a sum of their words. For me, it’s also a matter of respect to try when I can to speak in the native language of the place I live. I doubt my Macedonian will be perfect when I leave in another year and a half, but being conversational has already made my time here more fulfilling. 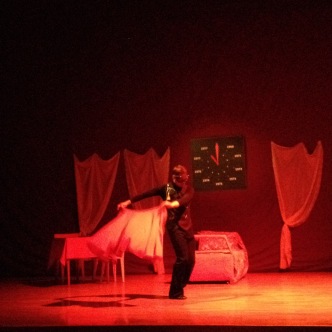 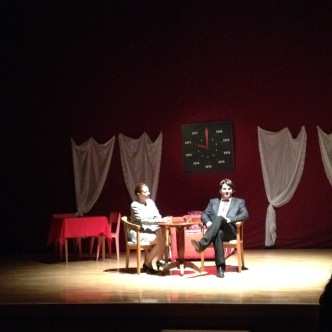 I went to see a play in Sveti Nikole this week. It was a drama, and I understood the whole thing! Language win!