Last week Kyle and I went on our second great bicycle adventure without even meaning to. We planned to take a short ride, maybe an hour total, out to a nearby village and back. Fairly flat along paved roads the whole way.

The first part of the journey went as planned, straight out along the road I usually go jogging along until we reached the village of Gorbintsi. We’ve been past the village two times, including when we went up to a village higher up a nearby mountain for easter/Labor Day, but had never actually gone into it. So we rode along through the village, passing confused locals who weren’t sure what these helmet-wearing American bicyclists were doing out here. We kept riding until we reached the end of town; we could either turn around and go back the way we came, or go left and continue along a dirt road to see where it went. Based on the direction, we were pretty sure eventually the dirt road would come out at another paved road near Bylazora, the archaeological site outside of town, to make for a nice loop. We still had plenty of energy and were having fun exploring, so down the road we continued. 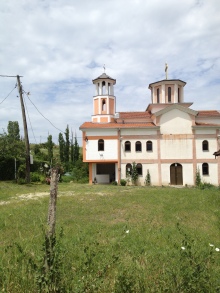 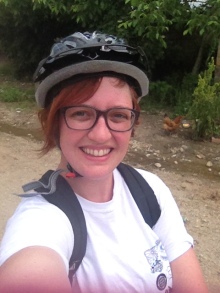 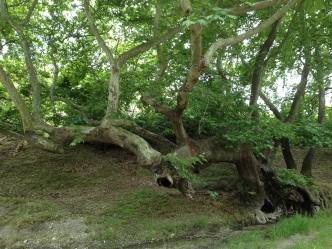 Luckily we refilled our water bottles at this spring before heading out!

For the first few miles, the dirt road was wide and looked like it was regularly used. It certainly looked like it went somewhere. We passed fields and beautiful countryside, stopping to admire the mountain views every once in a while. Eventually, the wide dirt road turned into a tractor path with grass growing in the middle, but still definitely rideable. The tire tracks got narrower and narrower, before eventually disappearing at the bottom of a hill. 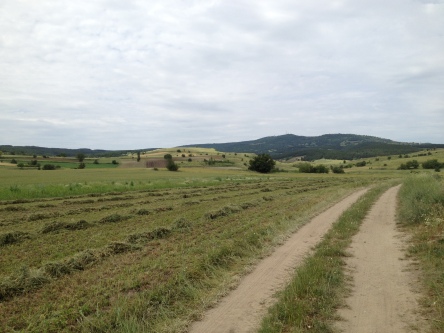 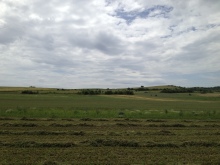 At this point we tried to check on our phones and see what we were near. The problem was that we were so in the middle of nowhere that there weren’t any good markers to steer towards. We could see the big mountain we had climbed back in February in the distance, so we headed towards it. After crossing a plowed wheat field and riding through a giant patch of thistles, we got to the top of a ridge and could see a small town and dirt road in the distance. At this point we’d been riding for two and a half hours, much longer than we’d intended, and were both starving as we didn’t think we’d need snacks on our short ride.

Where are we? Lost in a wheat field.

Riding across a wheat field in search of a road

Across another wheat field and down a long hill, and we finally arrived at a dirt road. We were also tired and sore from our rocky ride, but needed to get over one last long hill to go home. At this point we checked the map and realized we’d ridden almost all the way to Lozovo, the town we’d seen in the distance – and the next municipality over. After conquering the hill it was a downhill cruise towards home through the village of Kneje, past Bylazora and into town.

See that part that kind of looks like a trail? That path led us to freedom! 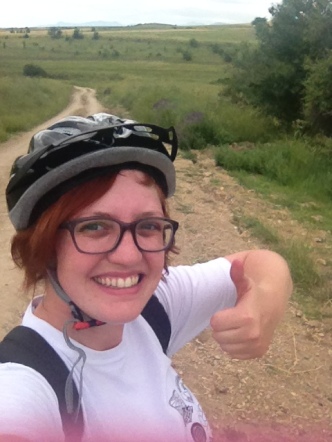 Back on a road! Success!

Something else cycle-related happened this weekend – the third annual Sveti Nikole motorcycle rally! It was the coolest thing ever to happen in town, and motorcycle clubs from all over the country came out. There was a rock concert with three bands, the last one being an apparently famous Serbian band. It was cool to see so many people out having fun and doing something new! It’s all organized by our local motorcycle club, who basically wanted an excuse to drink beer and listen to good music with their friends, and it’s grown every year. There were definitely a lot of people showing off their big, expensive, loud motorcycles, but there were also a hilarious amount of scooter-riders joining in. I really miss having our scooter, and it’s fun to think that if we had it here in Macedonia, we could actually be part of a motorcycle gang. 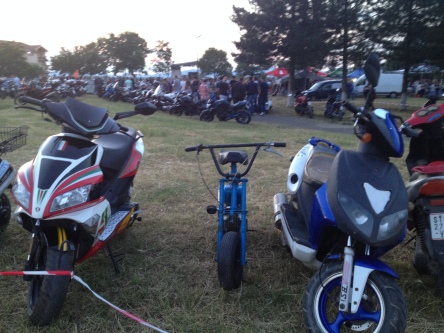 Scooters are motorcycles too 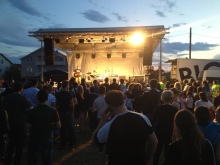 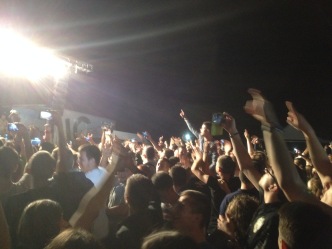 Here’s the official video from the motorcycle rally. It brought an estimated 10,000 people to Sveti Nikole (essentially doubling our population for the day) and caused a massive бурек shortage – all of the bakeries in the city were sold out within three hours on Sunday!!